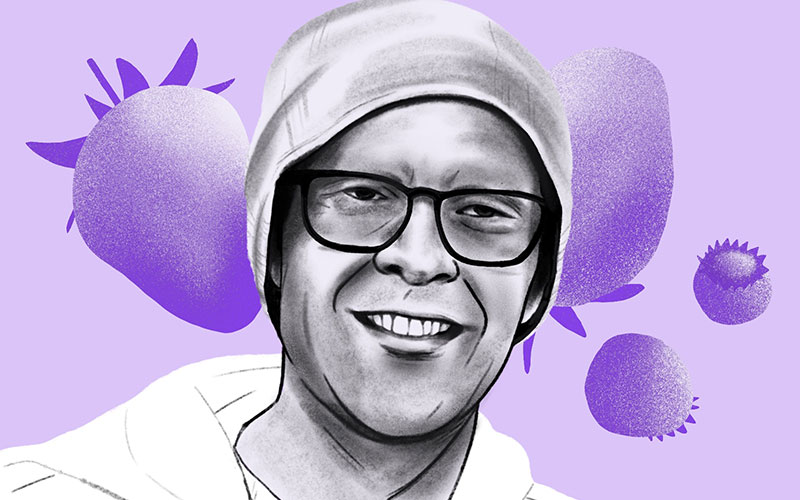 Rob Smith has run a successful business distributing locally-grown berries to grocers in Vancouver for more than two decades. What started as a small venture now makes $3 million in annual sales. But for all of Rob’s success, banks are still hesitant to offer loans without assets such as real estate. Despite a 23-year track record and having large national grocery chains among his clients, Rob has only managed to increase a line of credit with his bank to $50,000, from the $20,000 he started with. But if you’ve bought local berries from a Sobeys, Loblaws, No Frills, Real Canadian Superstore, or Whole Foods in Vancouver, there’s a good chance you’ve bought berries from Berrymobile.

The company’s success is all the more notable for Rob’s move into the food business happening almost by accident. While working in the software industry in the 1990s, he noticed that one of his employees was always taking the summers off to sell berries. “It bothered me at the time,” he says, “but then one day I went to see what she was doing. She was selling local strawberries, cherries, and blueberries. I was blown away. I thought about it for two or three years. Then one day I just said, ‘You know what, I'm going to sell local foods.’”

At first, Rob admits, it was a struggle getting local foods into big stores. Local produce simply wasn’t in demand—strawberries picked in California were sold in plastic clamshells. Large producers and wholesalers dominated the market. But Rob’s persistence and belief in small-scale local growers paid off, anticipating a soon-to-come cultural shift of consumers wanting to buy more locally produced food. Nowadays, more people are conscious of a food's carbon footprint and the effect that its shipping over long distances can have on the environment. For many shoppers, locally-grown food is the fresher, tastier, and more environmentally friendly choice.

“Our sales are quite strong for the six months or seven months a year that we operate,” Rob says. “But since we don't own any property, banks won't touch us when it comes to loans. For the past ten years we've been operating off of a $50,000 line of credit.”

As demand started to sky rocket and major grocery chains requested more produce from Berrymobile, $50,000 in credit wasn’t nearly enough to pay suppliers in a timely fashion. It isn’t uncommon now when Rob is buying $50,000 worth of produce from a supplier in a single day. A bank loan obviously wasn’t going to cut it. The asymmetrical nature of Berrymobile’s supply chain means that while large grocery stores typically pay net 30 or 45 days, the small producers who are supplying $30,000+ of fruit a week understandably want to be paid sooner. Plus there are the challenges with Berrymobile being a seasonal business, with months of almost no revenue at all. This is where Rob turned to Driven—to help him bridge that gap so he can pay his producers immediately.

“Even with our annual sales consistently over $3 million and profits in the six figures, the bank still wouldn't touch us. They asked us for collateral. We have almost $100,000 worth of coolers, a $200,000 fleet of trucks that we own, and point-of-sale equipment worth a few hundred thousand dollars. That’s around $600,000 in what we consider assets. When we brought that to the bank, they were like, ‘No, that's not an asset for us.’ Driven basically gave us the means to fund ourselves over the winter.”

With business models shifting so rapidly across so many sectors—from remote work to online direct-to-consumer models—you would think physical assets such as real estate would become less important. While banks may be late to catch up, businesses like Berrymobile are nonetheless finding growth and success without relying on real estate holdings to secure loans. For Rob that means doubling down on his ability to adapt, persevere, and even anticipate trends (he’s currently looking into vertical farming models). When the pandemic first arrived, for example, Rob began researching alternative revenue streams and decided on adding apples to the selection of produce he offers.

But then, one of his apple crops was badly damaged by a hail storm.

“To make a long story short,” he says, “we ended up turning those apples into apple juice. Which worked out great and all the stores wanted it.” Then came the challenge that Rob’s grown all too familiar with. His supplier wanted immediate payment for the inventory. And again, despite orders from Whole Foods, Safeway, and Loblaws, the bank once again turned Rob down.

“So I logged onto the Driven platform, applied for the $40,000 line of credit we needed, and the next day it was in our account.“

How To Start A Business In Ontario